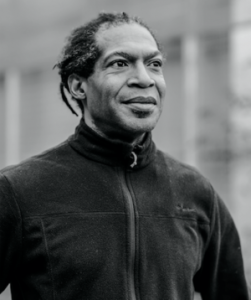 Hubert Petit-Phar started his choreographic studies at the Joseph Russillo School in Paris, alongside Régina Rils and Alvin McDuffie. These encounters later on lead him to Mudra International, where he majored in Interdisciplinary Studies, under the supervision of Maurice Béjart—from 1983 to 1986. Between 1985 and 1988, Petit-Phar danced at Mudra Junior (with director Jan Nuts). He also danced in many companies in the Netherlands (Black Vibration) and collaborated with several groups in Belgium.

In the Netherlands, Hubert Petit-Phar has a life changing encounter with the American Choreographer Felix White (The Katherine Dunham Company). Alongside him, Petit-Phar manages to explore a new aesthetical process.

Between 1988 and 1992, he worked his way through different choreographic movements—Balanchine, Billy Wilson, Jérôme Rohbins, Geoffrey Holden, Robert North, while dancing for the director Arthur Michell at the Dance Theater of Harlem.

He performed as a guest artist in “Porgy and Bess” at the Metropolitan Opera,

and refined his choreographic writing style with Bessie Schoenberg during his years in New York. Petit-Phar also performed at the Vermont Ballet and the Contemporary Ballet under the direction of J. Brown.

Back to France, Hubert Petit-Phar taught in many training centers, while continuing his journey as a dancer with the In Vivo Company, Calabash, etc.

He choreographs for many companies and training centers in France and in Europe:

He also started a research project about Jazz Culture and its relationship to the Contemporary World,

obtained his French State Diploma in Dance and his Dance Certificate of Competence.

Hubert taught for the ERD students (regular training for dancers program) at the CND - National Centre for Dance. He was a professor for the French State Diploma in Dance at the PESMD - Top Music And Dance Bordeaux Aquitaine in Bordeaux, Poitiers, and at the CEFEDEM - Training Center for Music and Dance Professors of Nantes.

In 2007, Petit-Phar creates La Mangrove Company with Delphine Cammal, and work to create gateways between Guadeloupe and Seine-Saint-Denis, through project creation and territory projects.

He gets his inspiration from literary works such as the corpus of Maryse Condé or Edouard Glissant.

Besides his choreographic work, Petit-Phar teaches for the Regional Council of Guadeloupe’s professional training programs.

Before her choreographic journey, Delphine Cammal was an Art History/Archeology student. She then switched paths and started studying choreography with Raza Hammadi from the Ballet Jazz’Art, then Anne-Marie Porras in Montpellier. That is where she obtains her French State Diploma, in 2002, and discovers more and more about jazz (Matt Mattox, Géraldine Armstrong, Patrice Valéro…). She decides to get training in different techniques: Cunningham, Limon, Martha Graham School of New York. First in 2001, then in 2003, Cammal wins a bronze and silver medal in Contemporary Dance at the International Competition of Biarritz. She then dances for the companies Ose, Emoji, Djilli, En Marche, and Premier Temps.

From her first research project in 2008—”Project Zohar”, a piece about the barbarism of natzis, she decides to partner with other scholars-artists such as Jessica Orsinet with “Origin(elles)” in 2011, and “Farley Mattchett” in 2014, artworks regarding justice and death penalty. She later on works with the plastic artist Ulrike Vidalain, focusing on violence and resilience with the play “L’échappée”. In 2015, she writes “El Extranjero”, an allegory of democracy inspired by the work of renowned author Gabriel García Márquez.

In 2007, Cammal creates La Mangrove Company with Hubert Petit-Phar, and co-signs 8 artworks as playwright or choreographer.

Working with different subject areas is crucial to them: Dance/Live Music, Dance/Plastic Arts, Dance/Video, and of course Dance/Literature. It is this blending that facilitates interactions and stimulates the research process.

Cammal has now been working on In Situ creations for 4 years, in order to further research studies

about Artworks/Public Space, The body within the city.

In 2015, she obtained her Master’s Degree in Cultural Organizations Management at Paris Dauphine.

4 years later, while observing the frailties and strengths specific to overseas artists, she creates “Rhizome”, a platform dedicated to accompanying choreographic structures in Guadeloupe.